This week, I want to talk about an issue people with disabilities face, in some cases, every single day. That issue is person first language.

Person first language is the idea of not identifying people as instances of a disease. You don’t want to say 30 autistic people, but instead, you want to be sure to say 30 people with autism. You always identify the person as a person, because, well, we ARE all people!

There’s definitely a lot of evidence that shows the way we phrase things and the way we discuss things affects how we internalize our thoughts about certain issues. If we always focus on the person first, and the condition second, this reduces the dehumanizing effect. And doing this makes communication with, and our overall thoughts about, that person immediate and much more personal.

This might seem obvious to many people with disabilities, or people who’ve spent a lot of time around people with disabilities. But, in fact, it’s quite common to hear “that autistic kid” or “that deaf guy.” But you wouldn’t describe someone without a disability without using people first language, because it just would not feel right. For example, if your friend John was a chef at a restaurant, you wouldn’t say “that chef John,” you would instead say “John, who is a chef.” It’s the person first. And that’s the way it should be.

I hope this helps clear up the topic of person first language. If you have any questions, feel free to make a comment below. I love getting your feedback and read every comment. 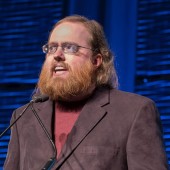